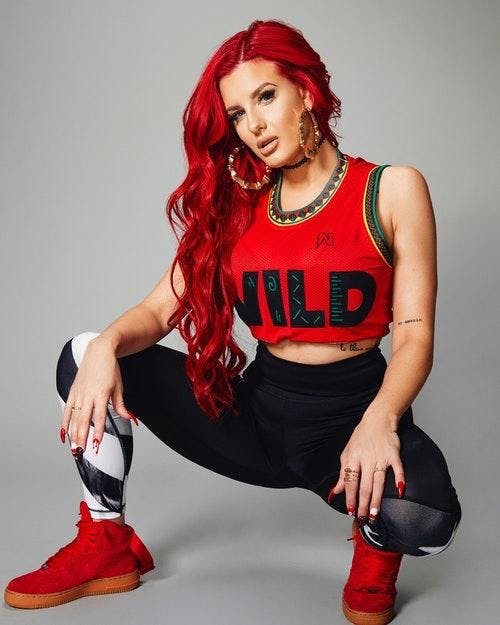 Justina Valentine, MTV’s quick witted fan favorite from Nick Cannon's Wild N Out is a clever lyricist that has a distinctive voice and knack for irresistible hooks. With over two million Instagram followers, bright red locks, and an infectious personality, Justina Valentine is an entertainer who sings, writes, acts, hosts and is widely known for her freestyling ability.

Justina has been featured on a series of McDonald’s commercials and as a co host on other popular MTV shows such as TRL and Singled Out, The Jersey Shore Reunion, The Challenge Reunion, and Ridiculousness. She was also a cast member on MTV’S number one show The Challenge.

Valentine’s original music has been featured on NBC, VH1, MTV, Oxygen, CW and national TV commercials for brands such as Maybelline. Justina made hip hop history in 2018 on popular radio show Sway in the Morning becoming the first female to freestyle on Sway’s famous “5 Fingers of Death” freestyle rap challenge.

Justina’s next album Favorite Vibe is set for release in 2019. Favorite Vibe follows Feminem, Valentine's mixtape of Eminem's classics. Justina Valentine currently offers 80+ million impressions which continues to grow daily. You can catch her every week on MTV or live on tour in a city near you. Valentine is currently filming her next season of MTV’S Wild N Out.

Hailing from St. Louis, HitMan Holla was a college athlete who started battle-rapping and ends every round with "ballgame," "yett yett" or both. HitMan's style is notable for his aggressive delivery and uses of techniques such as remixing his bars.

Originally from Brooklyn, Conceited made his claim to fame in the critically acclaimed "Motherland of Urban Renaissance" in Harlem, New York City. His first major-league battle took place during the fall of 2009 alongside battle rap legends Murda Mook and Loaded Lux at the Lion's Den. Conceited's new-school style of uncontested delivery, continuous bars and lyrical ability swept the rap battle scene like a storm in the night. Conceited and his battle rap crew S.O.N.S. have proven themselves to be industry veterans, ending battle rappers' careers league by league while also establishing a premier battle rap league of their own called THE JUNGLE. Conceited is recognized worldwide by rap industry veterans and fans alike. He has collected well over 5 million online interest views, won countless battles and prize money and plans to innovate the underground hip-hop battle scene with his influence.